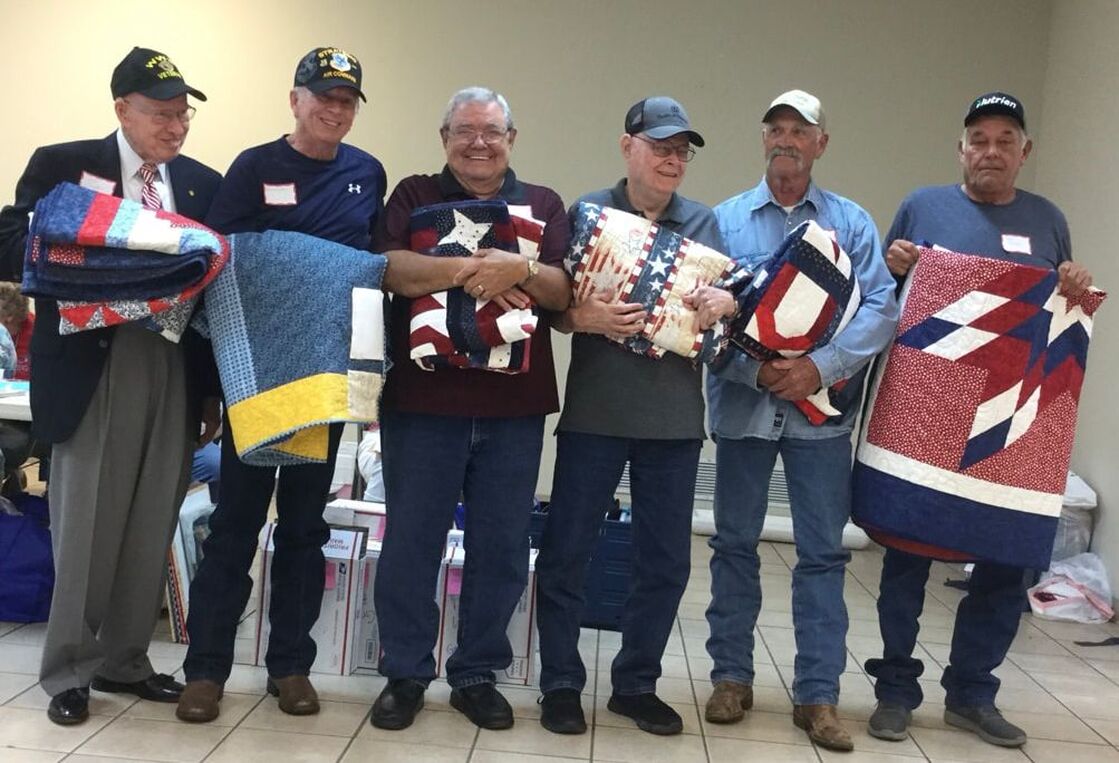 From left to right: Sam Slaydon WW II, Scott Wallace - Vietnam B 52 Bomber, James Randall Teel - Vietnam USAF, James C. Bishop II - Vietnam ARMY Infantry, Frank G. Bough - Vietnam Marines, William (Pete) Chasteen - Vietnam Army
The Corsicana Piecemaker Quilt Guild presented 6 Veterans with a Quilt of Valor at our July meeting. The men present had served in either World War II or Vietnam. As we listened to them tell of their war experiences we found ourselves moved with emotions. It was humbling to see them relate to each other. They truly became a "Band of Brothers" before our eyes. They greeted each other with respect and when one mentioned he did not serve over seas, or shoot a weapon but stayed in America as a translator, they each told him that had he not been able to do that, many more men would have died. In their eyes if you served our country, you were a soldier. Our World War II Veteran served in Germany at the height of the Nazi Concentration Camps. He looked us all straight in the eye and pointed his finger and said, "If anyone tells you those events did not happen, please tell them they did, and you know a man who saw this when he was 19 years old. The 5 Vietnam Veterans each had stories to share and among them there were many Purple Hearts earned along with Bronze and Silver Stars. It was a day of celebration and appreciation for all. These 6 Veterans made us realize the sacrifices made many years ago which helped to assure America remains...The Land of the Free.
The Piecemaker Quilt Guild has been involved with the Quilt of Valor Foundation since 2005. Since then, with the participation from many guild members, we have been able to make over 850 quilts to send to our most valued citizens...our Veterans. Along with this effort we also make items for children who are removed from their family due to difficult situations. We donate to the Women's Shelter, the Food Bank in Corsicana and we supply around three hundred Breast cancer Pillows to MDA Cancer Center a year. As a guild we want to help our community along with teaching and sharing our love for quilting.